Today marks the first birthday of script.aculo.us, which was launched on June 22, 2005.

Since it’s humble beginnings as an effects add-on to Prototype and coming directly out of what we at wollzelle needed for fluxiom, it’s seen many uses on high- and not-so-high-level web sites, plus it’s covered in many articles all over the web and the blogosphere and all kinds of books.

Conservative estimates are that script.aculo.us has had more than a million downloads (counting the packages from the script.aculo.us download site, and the inclusions within frameworks, first and foremost Ruby on Rails).

script.aculo.us was an enormous success (it ranks #4 in the del.icio.us all-time popular sites!) and personally I’m very proud of it (and all the people that contributed to it!).

A big thanks at all the contributors—let’s see if we can make the second year as exciting as the first.

The Web is still changing.

Tune your telnet to telnet ascii-wm.net 2006

Or read about it here (also has mirrors).

Along with fellow core team members and other railsers, I’m going to be one of the Judges for Rails Day 2006.

With lots of cool prizes around, we’re probably going to have a tough time on deciding what’s best (and I do hope some serious freakin’ hot stuff will be developed!).

I’m going to hang out at the campfire tomorrow, and maybe I can even answer a question or two if you’re using script.aculo.us (or just hit #prototype on freenode.net).

Dean Edwards, with help from Matthias Miller and John Resig has come up with a cross-browser solution for the onload problem (that is, onload only fires after all binary assets of a page are completely loaded, and not after the HTML document is complete).

The problem prevents using libraries like behaviour.js in a complete no-inline-javascript way in many situations, as users have to wait for all things being loaded before the page becomes usable.

Nice to see this issue finally being tackled.

(via The Hero Dies in This One)

Rails Day 2006 is coming soon and we here at wollzelle will add some cool stuff to the already very nice prize list.

And for you Rails developers: I want to see some cool uses of script.aculo.us, so please don’t let me down! 🙂

First off, I’d like to say that San Francisco is a super-nice city (see our expressions on the photo!). 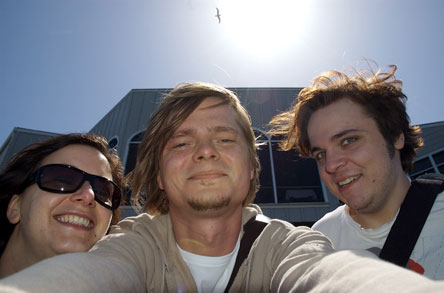 Without further ado, here are the slides:

Ajaxian has some notes on presentation so be sure to check these out, too.

Anyway, the Ajax Experience was a really nice conference, and tons of (nice, or should I say gentle?) people attended it (and my talk, too!). Hope to see some of you again soon.

The one thing I didn’t like about the trip was all the flying around. The airlines and airports really have to get their stuff together. 5 out of 5 flights had delays. We’ve also missed a flight on the way back and had to stay at a shabby airport hotel, and where delayed about 22 (!) hours, because of this. And we’re still waiting for our luggage to arrive. Time for some agility for travelling.

Update: Our stuff has arrived now, but things are missing (like one of the iPods). Well, anyway, hope to be back in San Francisco later this year (read it here first!). :/

RailsConf Europe 2006 has been officially announced!

All this RailsConf goodness with many, many cool speakers will be in London from September 14 to 15.

I’ll most probably do a talk there on something Ajaxy or Effectsy, so see you in September.

And better hurry with the registration, the first RailsConf in Chicago in June has sold out in less than a week. You’ve been warned. 🙂

Like those shiny reflections on web pages? Here’s a little bit of code to play with. It’s called the script.aculo.us Reflector.

Currently reported to work on IE 6, Firefox, Safari, and Opera, – if anyone finds out why, i’ll update it)- Update: Fixed, thanks to Green.

It’s not really meant for production use yet, as it will probably introduce performance issues and other nasty things, but it’s always refreshingly nice to see what a few lines of Prototype and script.aculo.us code can do.

Update 2: I’ve cleaned up the demo page/code and added some usage hints. Anyway, the “is not really meant for production use” warning is still up, so use at your own risk. 🙂

Presenting at the Ajax Experience in San Francisco

I’m giving a talk on using script.aculo.us and Prototype to deliver a better user experience on Thursday, May 11, in (hopefully) sunny and warm San Francisco, California at The Ajax Experience conference.

Not only me, but other Wollzellers will be there as well. Just drop me a line if you want to meet up, and we’ll see what we can do. 🙂